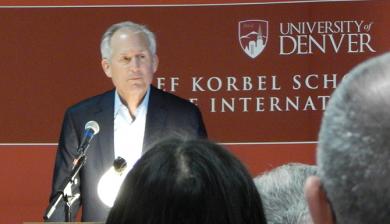 "Cooperation and competition can coexist," said W. James McNerney, Jr., chairman of the board, president and chief executive officer of The Boeing Company, the world's largest aerospace company.  This maxim was a key theme in a talk he delivered before 200 Josef Korbel School of International Studies students, faculty, and friends.  The talk was part of the School's Center for China-U.S. Cooperation's Jackson/Ho China Forum.

McNerney began his talk by looking back to President Nixon's visit to China in 1972. Speaking of the visit he said, "This vast and ancient world was ready to open her doors to the outside world." Indeed, China's doors are open and it has since become an important global power.  "I'm constantly amazed by the pace of change," said McNerney.  This change includes rapid growth in personal income and opportunity among China's citizens. McNerney added, "As incomes rise so does the ability to fly in airplanes."  As a result, Boeing and China have formed an important partnership.  Aside from selling planes to Chinese airlines (McNerney noted that Boeing just celebrated the delivery of the thousandth aircraft to China), Boeing assists China in developing their aviation infrastructure, and Chinese companies sells airplane components to Boeing.

McNerney suggested that future practitioners of international affairs can learn a great deal from the Boeing/China relationship.  For example, Boeing is working with China's state-owned Commercial Aircraft Corporation of China (COMAC) on three joint projects.  McNerney admits that he receives many questions on why Boeing works with a competitor, to which he often replies "cooperation and competition can coexist."  Rather than focusing on competition, McNerney chooses to focus on shared interests.

Like the Boeing/China relationship, the U.S./China relationship is simultaneously cooperative and competitive, but he cautioned students against viewing China as an adversary.  "At the Korbel School you're learning the craft of diplomacy.  Keep this in mind, focus on shared interests." Stressing the importance of positive U.S./China relations and offering one last bit of advice, McNerney said, "we can't have the zero-sum game as we do in domestic politics or we will crash and burn."