A packed house at the Josef Korbel School of International Studies heard a discussion tonight on likely foreign and domestic policy ramifications from the 2016 U.S. presidential election results.

The election of Donald J. Trump has upended the American political establishment, generated concern from many global leaders and elicited congratulations from others, including Russian president Vladimir Putin.

Dean Christopher Hill, a former four-time U.S. ambassador, and professor and pollster Floyd Ciruli, director of the school's Crossley Center for Public Opinion Research, held an onstage conversation followed by Q&A with the audience of more than 250 people.

Professor Ciruli reviewed key factors in the U.S. campaign including populism, the unpopularity of the two major-party candidates and a highly volatile and negative campaign. "This has to be the greatest polling failure since 1948," Ciruli said, referring to the Thomas Dewey/Harry Truman U.S. presidential race.

On October 31, the Crossley Center released a Colorado statewide poll showing Hillary Clinton and Donald Trump tied, which demonstrated Clinton's growing vulnerability. In other battleground states, Ciruli noted that few polls were taken during the crucial final days of the campaign. The Crossley Center plans a second poll in the spring of 2017 which will survey voters nationwide on the early performance of the new administration. 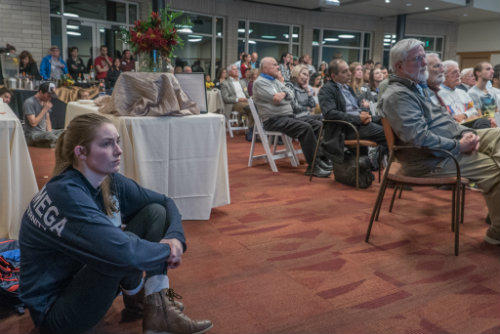 Shifting from the election results to foreign policy in a Trump presidency, "Donald Trump has made a number of curious comments," said Dean Hill, noting the candidate's proposals to give nuclear weapons to more countries, revamp America's alliance with NATO and build a wall on the U.S.-Mexico border to be paid for by Mexico.

"He's going to want to walk some of these proposals back," said Dean Hill, "but I don't see how he can walk back the wall" as it was his major rallying cry throughout the campaign. "Trump is very image-conscious and pays great attention to polls," added Ciruli, "and that will be a restraint on him" as president.

On the other side of the world, "It is probable that in the next four years we will wake up and hear that North Korea has stood up a missile with a nuclear warhead in a deliverable system," said Dean Hill, who was the chief U.S. negotiator during the Six Party Talks to end North Korea's nuclear capabilities, a former U.S. ambassador to South Korea and Assistant Secretary of State for East Asian and Pacific Affairs. "What will a President Trump do?" The president-elect has suggested that South Korea, Japan and perhaps Saudi Arabia should develop their own nuclear weapons.