“We are both immigrants, who had the fortune and the privilege of coming to live and thrive in this great country, America, for more than 60 years,” said John J. Sie on behalf of him and his wife, Anna. “Being able to give back to the community is the ultimate high.” 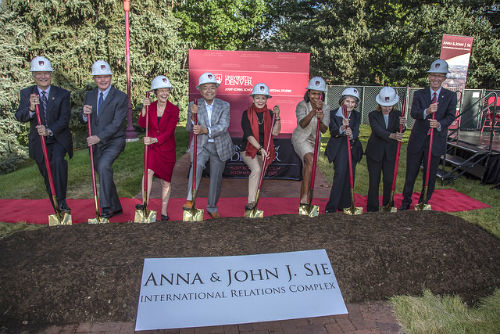 Mr. Sie, founder and former chairman of Starz Entertainment Group LLC and former member of the University of Denver's Board of Trustees, along with his wife Anna, previously donated $5.5 million to the Josef Korbel School to support the Sié Chéou-Kang Center for International Security and Diplomacy in honor of Mr. Sie’s father, a distinguished Chinese diplomat.

“On behalf of the students, faculty and staff of the Korbel School, I sincerely thank Anna and John J. Sie,” said Hill. “Because of their support, the Korbel School will take an enormous leap forward. Their generosity will benefit students of international affairs for generations to come.”

“We are very excited and grateful to the Sies for this opportunity to continue building our international impact with this new complex,” said Chopp.

The new five story, 46,000 square foot addition will adjoin the Josef Korbel School’s existing facilities to form the Sie Complex, which will house the Josef Korbel School, its undergraduate and graduate programs and its 10 research centers and institutes.
According to Hill, a major feature of the Sie Complex will be technology. Hill explained, “The mission of the Korbel School is to prepare tomorrow’s leaders to solve the challenges they will face in our increasingly globalized world. The Sie Complex will be equipped with state-of-the-art tools to ensure that our students have the knowledge and skills needed to excel in their careers. The Josef Korbel School will also be able to increase its ability to communicate with scholars and practitioners around the world. Once it’s complete, students and faculty will be able to collaborate with their peers in the far reaches of the globe.”

University Architect Mark Rogers and architectural firm Anderson Mason Dale collaborated on the design, with input and guidance from the Sie family. In addition to upgrades in technology, noteworthy features of the building will include:

The Weitz Co. has been selected as the general contractor. Construction of the new building is scheduled to be completed in February of 2016. Renovations of the School’s existing facilities will commence shortly thereafter to be finished July 2016. The estimated total cost of the project is $23.36 million.