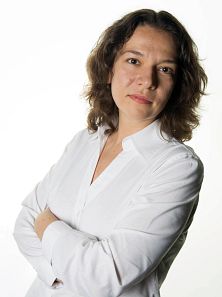 Director of the MA in Media & Public Communication

I am an Associate Professor in the Department of Media, Film, and Journalism Studies, where I also serve as Director of the M.A. in Media and Public Communication and the Graduate Certificate in Public Diplomacy.

My research draws on critical theories of communication and culture and explores the intersections of media, markets and power in global contexts. I am particularly interested in critical perspectives on promotional culture, nation branding, and public diplomacy. Much of my research focuses on the post-communist countries in Central and Eastern Europe and the former Soviet Union. I teach graduate and undergraduate classes in media theory and history, strategic communication, public diplomacy, and branding. Before becoming a college professor, I have worked in advertising and public relations in the United States and in my native country, Bulgaria.

My research draws on critical theories of culture and communication and explores the commercialization of national identities in transitional contexts. Much of my published work examines nation branding and public diplomacy from a critical perspective and analyzes the intersections of media, markets, and power in conditions of globalization.