Since 2010 the Josef Korbel School has been honored to host U.S. Army War College Fellows who spend one academic year with us auditing courses, giving lectures and conducting research.

Each year the Army selects 90 distinguished career field grade officers, all with Master's Degrees and substantial experience overseas, to pursue advanced education in international studies in preparation for their future assignments. Half of these officers attend the Army War College while the rest are deployed to top-level universities throughout the country. We are privileged to be included in this prestigious group which includes Harvard, Georgetown, MIT, and Tufts Fletcher School. 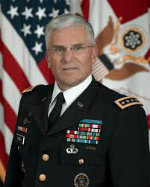 The program was expanded by General George W. Casey Jr. (Ret.), a Korbel School alumnus (MA '80, International Relations), during his tenure as Chief of Staff of the Army (2007-2011). General Casey's experience as Commander in Iraq (2004-2007) led him to believe that senior Army officers would benefit from expanded training and exposure to political and cultural aspects of international affairs, as well as instruction on how the military can more effectively communicate with civilians within the government.

As a result of General Casey's vision, Army War College Fellows now take advantage of a learning environment that is expanded and enhanced from that which is traditionally offered by the war colleges, and also parlay knowledge gained for the betterment of the Army.

At the same time, Army Fellows act as ambassadors of the U.S. Army, engaging students, faculty, researchers and the public in presentations and a host of formal and informal engagements. The Fellows' experiences in leading educational institutes such as the Josef Korbel School will help prepare them for positions of broad scope in highly complex, ambiguous environments, often dealing with problems that have no clear-cut solutions. 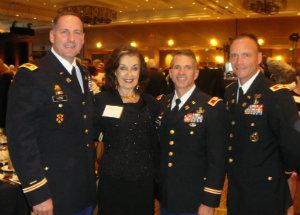 During their academic year at the Korbel School, under the mentorship of program director professor Karen Feste, Army Fellows have two broad tasks: to reach out to students and faculty by providing expertise and advice on the role and contribution of the U.S. military in shaping global affairs; and to gain knowledge by reading and participating in our graduate seminars.

Korbel's Army War College Fellows are regarded as experts qualified to deliver lectures, and as students needing to learn. While at Korbel, the Army requires Fellows to prepare a mini-thesis on a topic important to the Army. Colonel Craig Simonsgaard's paper, "Negotiating With Terrorists: The Way Forward," was published in the Army War College Review (February 2016).

All officers work extensively with Korbel students, help develop veterans assistance on the University of Denver campus, and greatly enrich seminar discussions through their participation. We are grateful for their contributions to the Josef Korbel School. 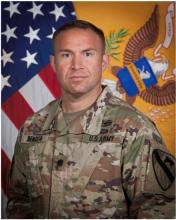 Colonel Jonathan Bender holds a B.A. in Criminal Justice from Texas Christian University, and a Master's of Management and Leadership from Webster University. He has served in armored and mechanized units throughout his career. His first duty assignment was to Fort Riley, Kansas where he served as a tank platoon leader and Tank Company Executive Officer where he was deployed to Iraq as part of Operation Iraqi Freedom. Following the career course COL Bender was the Company Commander for Echo and Headquarters company 2-81 Armor as well as the Aide-de-Camp for MG Robert Williams the Chief of Armor and Cavalry at Fort Knox, Kentucky.  His next assignment took him to Fort Hood, Texas where he commanded Delta, Company 1-66 Armor and again deployed in support of Operation Iraqi Freedom. Following company command he was assigned to Fort Knox, Kentucky and selected as an instructor at the Maneuver Captains Career Course and the 316 Cavalry Brigade Operations Officer. Following the U.S. Army Command General Staff College at Fort Leavenworth, Kansas COL Bender was assigned to Fort Carson, Colorado where he served as both Battalion S3 and XO for 1-66 Combined Arms Battalion and Brigade Operations Officer for 3rd Brigade Combat Team where he deployed twice in support of Operation Spartan Shield.  COL Bender moved onto a joint assignment serving as the Counterterrorism Operations Chief and Operations Deputy for the Network Engagement Team Directorate at U.S. Southern Command. 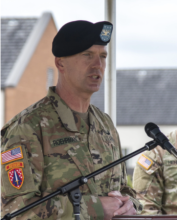 Colonel Chad M. Roehrman holds a doctorate of strategic leadership from Regent University in Virginia Beach, Virginia, an M.A. in Defense Studies from King's College London and a B.S. in Engineering Psychology from the United States Military Academy in West Point, NY. He was Squadron Command for the 3d Squadron, 2d Security Force Assistance Brigade where he was commander of 14 advisor teams comprised of 175 personnel. In this role he deployed the squadron headquarters and 12 advisor teams to both Iraq and Afghanistan to build partner capacity within its security sectors. He has trained thousands of soldiers and held leadership and staff positions from the platoon through joint task force level with combat duty in both Iraq and Afghanistan. 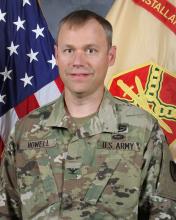 Colonel Ryan Howell is an Armor Officer with 22 years of service. He was commissioned through the Reserve Officer Training Corps (ROTC) program with a B.A. in International Studies from the University of North Carolina at Chapel Hill in 1997 and a Master's of Military Studies (MMS) from Marine Corps Command and Staff College in 2009.

Howell served in all major armor and cavalry leadership positions from Platoon Leader to Cavalry Squadron Commander. He served in U.S. Northern Command's domestic operations division where helped integrate federal resources in support of disaster relief missions across the U.S. He has three combat deployments to Iraq and two to Afghanistan. He also served in Sinai, Egypt as part of the Multinational Force and Observers and in the Republic of Korea 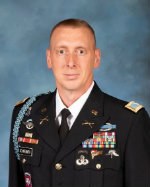 Colonel John Schwemmer graduated from Valley Forge Military College and was commissioned as an Infantry Officer in 1995. 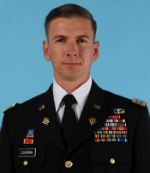 Lieutenant Colonel Jason Dickerman enlisted in the Army in October of 1994. Following graduation from Western Michigan University in December 1994, where he earned a Bachelor of Science degree in Elementary Education, he attended Armor Crewman One Station Unit Training at Fort Knox, KY.

During his first assignment with 1st Squadron, 3rd Armored Cavalry Regiment (1/3 ACR), LTC Dickerman was selected for and attended Officer Candidate School at Fort Benning, GA, where he was commissioned as a Military Intelligence (MI) Officer in June of 1997. He is a graduate of the Military Intelligence (MI) Officer Basic Course, the Infantry Officer Advanced Course, the Combined Arms Service Staff School, the Joint Air Tasking Order Process Course, the Command and General Staff College, and the Joint and Combined Warfighting School's Joint Primary Military Education Phase II. He earned a Master of Science Degree in International Relations, from Troy University in 2009. 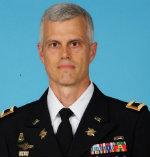 COL Jamie Efaw was commissioned in 1993 by the United States Military Academy at West Point with a Bachelor of Science degree in Psychology.

Additionally, COL Efaw has attended the US Army's Airborne, Air Assault, Ranger and Jumpmaster schools. His civilian education includes a Master of Arts in Social Psychology from the University of North Carolina at Chapel Hill in 2002. 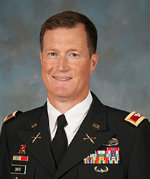 COL Christopher L. Smith was commissioned a lieutenant of Field Artillery in 1994 upon graduation from the University of Illinois at Urbana-Champaign with a Bachelor of Arts in History. He earned a Master of Arts in Political Science from Western Illinois University. His military education includes the Field Artillery Officer Basic Course, the Paladin Commanders Course, the Adjutant General Advanced Course, the Defense Strategy Course, the Basic Strategic Arts Program, and the Command and General Staff College.

COL Smith was first assigned to Fort Stewart, Georgia, and the 1st Battalion, 41st Field Artillery Regiment, where he served as a company fire support officer, a platoon fire direction officer and platoon leader. He participated in numerous training and deployment exercises over a three year period, to include two rotations to the National Training Center. 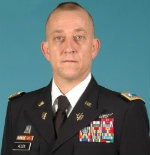 LTC Daniel Allen enlisted in the Army in April of 1989 and graduated from the Avionics, Navigation, and Flight Systems Course. He subsequently received an Army Green to Gold scholarship and earned his commission as an Armor second lieutenant, in 1994, upon graduating from the University of Arizona with a Political Science Bachelor of Arts degree. 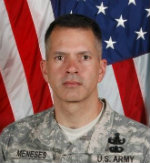 COL Gerardo V. Meneses graduated in May 1992 from the United States Military Academy. He was commissioned a 2nd Lieutenant in the Ordnance Corps and branch-detailed to Armor branch. He graduated from West Point with a Bachelor of Science degree in Engineering Psychology and later completed a Master's of Education degree at Long Island University. 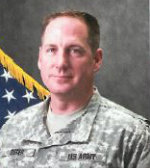 LTC Michael Oster was commissioned as a transportation officer through the SD Army National Guard Officer Candidate School in 1990 after serving for four years as an enlisted Combat Communications Specialist. He holds a Bachelor's of Science degree in Economics and a Master's of Science degree in Industrial Management, both from South Dakota State University.

COL Craig Simonsgaard is a native of Phoenix, Arizona. He is a Distinguished Military Graduate from Arizona State University with a Bachelor of Arts degree in History. He also has a Master of Business Administration from Webster University. 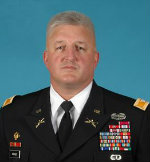 OL Michael C. Kasales (Ret.) graduated from DePauw University as a Distinguished Military Graduate and was commissioned as an Armor Officer in 1987.

After graduating from the Command and General Staff College, and earning a Master of Arts degree at Fort Leavenworth, Kansas, in 2001, COL Kasales was assigned to Fort Lewis, Washington where he served as the Squadron Operations Officer for the 1st Squadron, 14th U.S. Cavalry Regiment (RSTA) and as the Brigade Operations Officer for the 3rd Brigade (SBCT), 2nd Infantry Division during the first Stryker Brigade Combat Team deployment to Operation Iraqi Freedom. 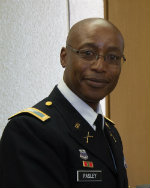 LTC Frederick Pasley was born in New York, and began his military career at South Carolina State University when he enrolled into the Reserve Officer Training Course. After receiving his commission as an Infantry Officer, Second Lieutenant, in 1986, LTC Pasley joined the South Carolina Reserve National Guard.

He earned a Bachelor's degree in Criminal Justice from South Carolina State University and a Master's degree in Education from The Citadel. 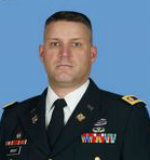 LTC Michael T. Wright was born at Elmendorf Air Force Base, Anchorage, Alaska, and began his military career enlisting into the Infantry in 1986. While serving with the 9th Infantry Division, he attended Eastern Washington University, winning a three-year ROTC Scholarship.

He earned a Bachelor's degree in Business Administration and Marketing from Eatern Washington University and a Master's degree in Organizational Leadership from Gonzaga University. 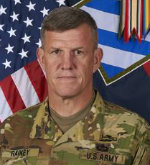 COL Rainey was commissioned in 1987 through the ROTC program at Eastern Kentucky University where he received a Bachelor's degree in Criminal Justice. He also earned Master's degrees in Public Administration from Troy State University and Military History and Strategy from the U.S. Army School of Advanced Military Studies.

COL Rainey is an infantry officer whose assignments include command at every level from platoon through Brigade Combat Team and staff positions including service in Korea, Europe and the Middle East. He is a veteran of four deployments to Iraq. 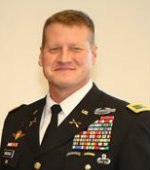 He is a graduate of the U.S. Army Command and General Staff College among other courses. COL Grosso holds a Bachelor of Arts in Political Science from the University of New Hampshire and a Master's in Leader Development and Counseling from Long Island University.