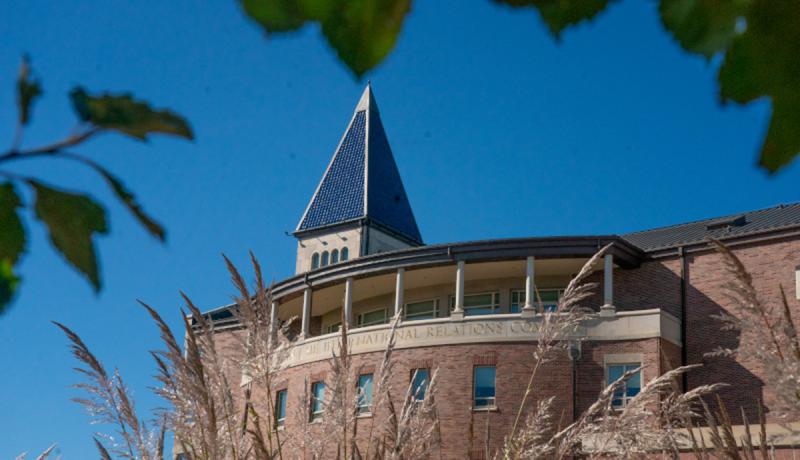 Leaders of four prominent U.S. think tanks came together last week to take part in a discussion about civil discourse, diverse perspectives and the role of disagreement in a healthy democracy.

The event was the first of the University of Denver’s Denver Dialogues, a series of virtual conversations with experts from the American Enterprise Institute, Aspen Institute, Hoover Institution and New America meant to spark respectful and constructive conversations about world and national events.

University of Denver Chancellor Jeremy Haefner introduced the event by underscoring the importance of engaging authentically and respectfully when challenging evidence-based ideas and presented Denver Dialogues as a way to engage with complex topics as an academic community.

“Since my inauguration as Chancellor, I have committed the University of Denver to be a beacon for intellectual curiosity: for free speech, academic freedom and thought pluralism,” Haefner said. “We do this—and we affirm these values—because they are critical and central to the functioning of democracy.”

Mayer initiated the discussion by commenting on the importance to democracy of everyone, including those whose political positions do not eventually prevail, accepting the results of referendums on those positions.

“It’s hard to think of a more important issue in this country and, indeed, around the world, than the deterioration of the civic culture on which democracy depends,” Mayer said. “A fundamental requirement of a democracy is that, while we may disagree vehemently about what is to be done, we accept the legitimacy of those with whom we disagree.”

Before opening the floor to the think tank leaders, Barma emphasized the purpose of Denver Dialogues: to model difficult yet respectful conversations about tough subjects for the DU and Denver communities.

“One of the Scrivner Institute’s central mandates is to serve as a hub for conversations on public policy and the collective good,” she said. “The Denver Dialogues will bring substantive policy conversations to our campus and our broader community, while modeling approaches to constructive debate.”

So, what is the nature of the problem when it comes to dwindling civility in public discourse?

Rice said it comes down to information echo chambers.

“We get our information in groups—affinity groups, which we feel very comfortable [in],” she said. “I can, today, go to my website, I can go to my aggregators, can go to my cable news channel. I never have to actually encounter anyone who thinks differently.”

Rice said the opening of hearts and minds to others’ points of view will allow civil discourse to blossom.

“Even if we were disposed to listen, we are not in spaces where we are being exposed to people who disagree with us, in a way that allows us to talk, rather than shout, or simply defend,” she said.

Slaughter offered up a valuable lesson: You can’t persuade unless you’re willing to be persuaded.

“And that means coming at any discourse, or dialogue, or conversation with an open enough mind to think, ‘I’m listening and I’m willing to change my mind,’” she said. “Maybe not my core principles, but I’m listening and willing to let you persuade me, and in return, you’re more likely to let me persuade you.”

The think tank leaders urged DU community members to see themselves not just as red or blue—to think about people as more than their policy stances.

Doar placed the blame for increasingly volatile conversations on the growing polarity of political parties.

“We’re retreating to our corners, and the fringes are dominating the dialogue—and the social media world exacerbates that by feeding into and promoting the most angry responses from people that participate in that,” he said.

“I would want to particularly compliment you guys at the University, because I believe part of the problem is on our college campuses … there hasn’t been sufficient viewpoint diversity, and there has been too much shutting down of people who say things that are contrary to the prevailing view,” Doar continued.

Dan Porterfield argued that the problem lies within the human spirit itself.

“We are the problem,” he said. “Because all humans have a tendency to gravitate toward what makes us comfortable or move away from what we fear. This is one of the things we all have to learn, in our schooling, in our family upbringing—how to deal with our vulnerability in such a way it doesn’t prevent us from engaging with others.”