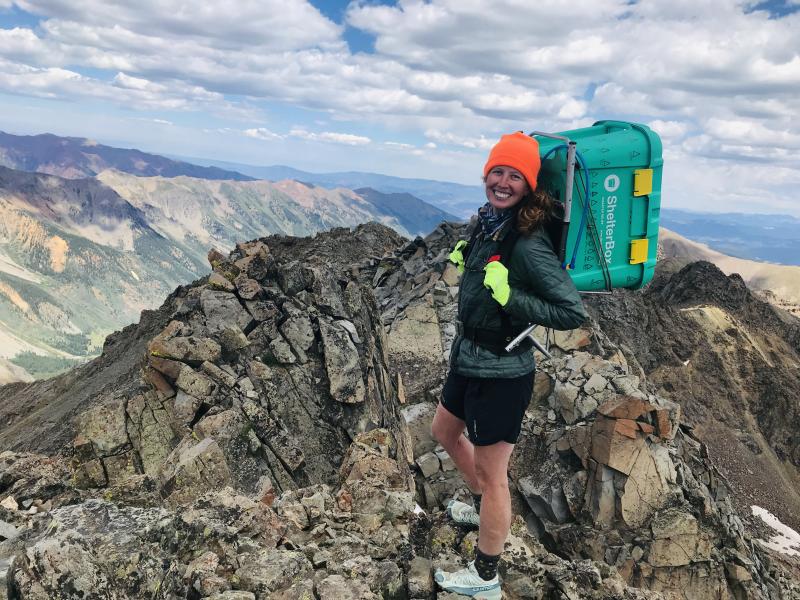 On just Day Two of her monthslong journey to climb all 58 of Colorado’s fourteeners, University of Denver graduate student Brittney Woodrum stood face-to-face with Little Bear Peak. The Alamosa County mountain is a Class Four (the most technically difficult) and includes a steep climb up a long rockface known as the hourglass, with high rockfall danger.

The already challenging hike was made all the more difficult by a special piece of gear strapped to Woodrum’s back: a green box, fixed to a metal backpack frame. It’s called a Shelter Box, and it’s made by a company of the same name. Woodrum’s trip raised money for the emergency aid organization through donations, which totaled nearly $85,000 when she ascended her final peak in September.

Helmet on, armed with experience, but without the safety of ropes, Woodrum felt shaky and nervous. The box’s added surface area added to the situation’s precariousness.

“It’s bulky and it’s heavy, but really that box was what was driving me forward. I think if I hadn’t had that box on my back, I probably would’ve quit on [Little Bear]. But I was doing it for a greater cause; that’s what inspired me to keep going,” she says. “I made it up and I made it down. After that day, the bar had been set — I knew what I could do.”

Doubts out the window, Woodrum accomplished her goal when she ascended Pikes Peak on Sept. 26. Along the way, she camped, built a strong community of hikers she calls “tramily” and got to know Colorado a little better. Most importantly, she met her financial goal and shared Shelter Box’s mission at countless presentations across the state.

Shelter Box deploys its green containers to areas in want of emergency disaster relief, a service that’s particularly needed as the world grapples with the COVID-19 pandemic. Each box is packed with lifesaving gear: a tent, tools, lighting, blankets, pots and pans, wash basins and soap.

“Just because we are in the midst of a pandemic doesn’t mean disasters have stopped,” Woodrum says. “They are still happening, and Shelter Box is still deploying weekly and sending aid out. Having that money allows for Shelter Box to continue to go and deploy. It also allows for them to scale up the amount of aid they deliver.”

Since the July day she began, that mission has resonated with people everywhere. Woodrum’s “Fourteener Project” has been featured on CNN and in People magazine, among others, inspiring audiences locally and nationally to give, get outside and make a difference during a particularly challenging moment.

“How do I feel now?” Woodrum asks. “I feel happy. I feel changed. … I think these mountains and these peaks are not the last that me and that box will see together.