Political pollster and analyst Floyd Ciruli will be inducted into the Denver Press Club's Hall of Fame at a September 9th banquet. Mr. Ciruli heads a Denver-based research and consulting firm, Ciruli Associates, and has provided political commentary, analysis and polling for the past 35 years for both local and national media outlets. He hosts Colorado's leading blog for politics and trends with more than 4,500 followers at www.fciruli.blogspot.com.

Mr. Ciruli has served as a regular commentator for a number of media outlets, including on-air election night coverage for 9KUSA beginning with the 1988 Denver International Airport election. He also conducted election polling for several media outlets, and was cited as one of the country's most accurate pollsters on Nate Silver's 538 website. In addition, he regularly writes guest editorials on political topics. 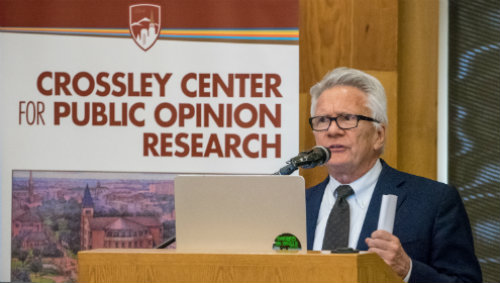 In 2014, he helped create the Crossley Center for Public Opinion Research at the Josef Korbel School of International Studies at the University of Denver, where he serves as director and teaches graduate courses in public opinion and foreign policy. He is past-president of the Pacific Chapter of the American Association of Public Opinion Research (AAPOR) and an active AAPOR member. Mr. Ciruli also is past-president of the Georgetown Law Alumni Board.

He has led several local and statewide ballot initiative campaigns, including the Denver metro Scientific & Cultural Facilities District (SCFD) from its inception in 1988, and each SCFD renewal – including on the upcoming 2016 ballot. He also led the Great Outdoors Colorado campaign, two successful bond issue campaigns for the Denver Public Library, and others.

A native of Pueblo, Colorado, Mr. Ciruli received a Bachelor's degree from the University of California Los Angeles, and a law degree from Georgetown University.