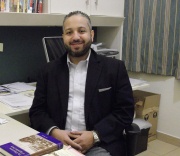 The Josef Korbel School's Center for Middle East Studies is pleased to welcome visiting scholar Mohamad Hamas Elmasry from the American University in Cairo. Elmasry's visit is made possible as part of a $294,200 Carnegie Corporation of New YorkCentennial Grant. The Centennial Grant provides fellowships to U.S. universities in support of social scientists from the Arab region.

Recently, we had the opportunity to ask Elmasry questions about his background and his work.

Korbel: Please tell us about your professional background.

As a researcher, I am very interested in the sociology of news – how news is produced. Over the past few years, I have focused heavily on Arab and Egyptian news media.

Over the past year and a half, I've been doing quite a bit of political analysis on Egypt. I've published several written analyses, and done analysis on Al-Jazeera, CNN, the BBC, and for other news outlets.

K: What are you currently working on?

E: Currently, I am working on post-coup media in Egypt. I'm interested in how Egyptian news media are covering the Muslim Brotherhood, the Egyptian military, and political affairs in general. My projects seek to identify dominant discourses and explain how and why they are popularized.

K: For those of us who may not be familiar with Egyptian media, how would you characterize the state of journalism in Egypt today?

E: Going back decades, Egyptian journalism suffers from a general lack of professionalism. Journalism education is of a generally low quality, and training programs are severely lacking. Moreover, Egyptian journalism has traditionally been plagued by a censorial political culture, government influence over press content, and, in recent years, concentration of private media ownership. Some research shows that many journalists have difficulty accepting watchdog rules, and, instead, provide explicitly partisan reporting.

Since the July 3 military coup, Egyptian journalism has taken a turn for the worse. The news environment is very one-sided, with newspapers and news talk shows demonizing and dehumanizing supporters of deposed president Mohamed Morsi. News coverage is generally very one sided and propagandist. The post-July 3 government has attempted to stifle dissent and intimidate journalists, making life difficult for journalists who have attempted to provide more balanced reporting.

K: How would you characterize U.S. popular journalism's coverage of issues in the Middle East?  How (if at all) might they improve?

E: Academic research into U.S. news coverage of the Middle East shows that there are fairly serious problems with the reportage. First, due to increasingly limited foreign desk budgets, there is less and less coverage of the Middle East. Also, coverage tends to be superficial and lack context, marginalize Muslims and Arabs, and portray many middle east actors in stereotypical ways.

Given the importance of the Mideast region, it is important for American news organizations to dedicate additional focus to the region. One way for news organizations to address their generally poor record on balance and fairness would be for them to make concerted efforts to source more – and different kinds of – political and social actors.

Some poor reporting notwithstanding, American news coverage of Egypt's military coup has been better than anticipated. For instance, some news outlets – including CNN, the New York Times, and the Washington Post – have sometimes gone to great lengths to provide voice to supporters of deposed president Mohamed Morsi. This is commendable considering the Egyptian government's crackdown on pro-Morsi voices and the general difficulty associated with reaching pro-Morsi sources.

K: What do you hope to gain from your experience as a visiting scholar here at the University of Denver's Center for Middle East Studies?

E: I'm very appreciative of the opportunity afforded me. The Center of Middle East Studies has, to this point, put me in position to carry out a fairly aggressive research program. The Center has provided me with the time, freedom, and resources to be productive. To date, I've published analyses in Open Democracy and Political Violence at a Glance, and have two analyses scheduled to come out in Al-Jazeera and Religion Dispatches. I've also done media interviews and began substantial work on longer research projects designed for peer-reviewed publications.