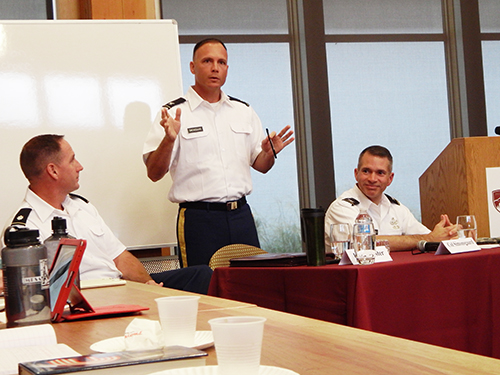 The U.S. Army War College Fellows program at the Josef Korbel School of International Studies has grown to three participants – a welcome advancement during the school’s fifth year of involvement, said the program’s director.

Karen Feste, a professor at the Josef Korbel School and the U.S. Army War College Fellow faculty mentor, said the increase is a testament to the program’s value and to the character of the Fellows who participate in the program.

“These are truly practitioners of the senior level,” Feste said, “It’s humbling in order to have them here.”

This year’s fellows are COL Gerardo V. Meneses, COL Craig A. Simonsgaard, and LTC Michael J. Oster. Two officers participated last year, compared with only one officer participating each year before that since the program’s inception at Denver in 2010.

The decades old program, which integrates senior military officers within educational institutions, has served a dual function of simultaneously broadening the perspectives of the Fellows, as well as those in the local community who they are immersed among, Feste said. By spending a year reading and studying in a university environment, the officers are able to gain more knowledge about international affairs, while imparting their own personal, on-the-ground military experience to students and faculty.

Candidates for the Fellowship must undergo a competitive application process, and those admitted are typically officers who have demonstrated superior leadership and intellect, sometimes even in dangerous places, such as Iraq or Afghanistan.

By the end of the academic year, the officers must write two papers, one of which revolves around a topic important to the military and is later compared amongst all of those submitted by each of that year’s Fellows around the world.

It was the Korbel School’s prestige and reputation in the field of international studies that helped COL Meneses to choose the University of Denver after he was accepted to the Army Fellows program. Meneses said that working among civilians in an academic environment provides officers like him with the opportunity to improve their ability to collaborate with people who see things differently from the military perspective. “We spend all our lives, all our career, with the military,” he said. “So I figured this was a good, broadening experience.”

COL Simonsgaard agreed, and emphasized the programs capacity for assisting officers to interact with civilians, who are becoming increasingly more involved in conflict resolution. “So we’re expected to not only learn how to deal with folks who don’t think like we do, but also to show them how the army operates, so we can just work better together in the future,” he said.

“In terms of a view of the world with a more diverse set of ideas, you can’t beat a Fellowship experience for that kind of broadening.”