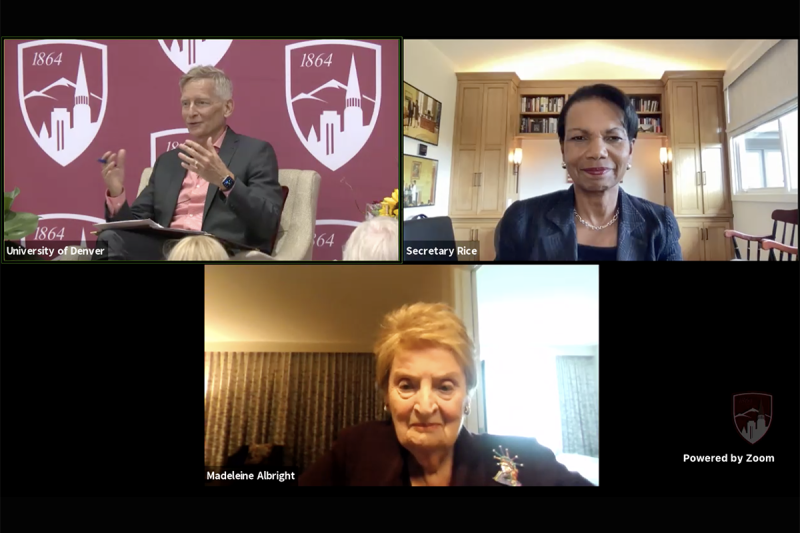 During a Wednesday inauguration event, University of Denver Chancellor Jeremy Haefner conversed virtually with former U.S. Secretaries of State Madeleine Albright (Hon. PhD ’16) and Condoleezza Rice (BA’ 74, PhD ’81, Hon. PhD ’96) on “The Challenges to Democracy,” as the women with deep ties to DU illuminated the dangers to democracy in the United States and abroad. Provost Mary Clark introduced the session and the two secretaries of state.

“It’s a tremendous honor to have this conversation with you and indeed a wonderful way to celebrate inauguration week. You two are some of my favorite people to engage with as chancellor,” Haefner said.

Albright was the country’s first female secretary of state, but earlier in life she spent countless hours on DU’s campus. Her father, Josef Korbel, founded and served as the first dean of what is now the Josef Korbel School of International Studies.

“We came to the United States in 1948, and my father had been a [Czechoslovakian] diplomat. … In 1949, the Rockefeller Foundation found him a job at the University of Denver,” Albright told an audience of approximately 200 in-person participants and 1,700 Zoom viewers. “We all fell in love with Denver and Colorado, and our immigrant story began there.”

Years later, Rice made her way to Denver from Alabama, eventually enrolled at DU and found a mentor in Josef Korbel, who guided her through undergraduate and doctoral studies.

“From failed piano major to uncertain new master’s degree student to a PhD, the University of Denver shaped me quite dramatically,” Rice said.

As Haefner steered the discussion to democracy, Rice spoke of the growing cynicism toward American institutions and lack of access to education, while Albright expressed concern over disinformation and the artificial divisions it creates among Americans.

The three cited the importance of civil discourse and agreed that universities serve as an important setting to preserve healthy democracy. Rice noted that challenges facing democracy more broadly are also creeping into educational settings.

“I tell my students all the time: ‘If you’re constantly in the company of people who say ‘amen’ to everything you say, find other company.’ We’ve somehow gotten into the idea in universities that we want people to be comfortable,” Rice said. “I actually don’t. I want my students to be uncomfortable with challenge, with new ideas, with things that they haven’t heard, with people that are different.”

Albright concurred. As a professor of Practice of Diplomacy at Georgetown University’s School of Foreign Service, she knows the difficulty of teaching at a university in today’s political climate.

“I think the universities are on very delicate ground at this time instead of doing what Condi was saying. We are supposed to test each other and get people on uncomfortable ground,” she said. “The part that is absolutely essential when you’re doing national security decision-making is to have somebody … to disagree. You need to have alternative voices.”

Asked about liberalism, Albright said that in the United States, the social contract — under which the state creates policies that benefit the people, who take an active role in government — has broken down. This breakdown, she said, has given liberalism a “tilted” definition. Rice agreed, adding that while the United States is imperfect in many ways, it remains a strong example of democracy on a global stage, and she is quick to defend American democracy among foreign powers.

After a wide-reaching and insightful conversation, Haefner gave the audience a chance to engage. In response to a question on guidance for young women looking to work in international studies, Albright reiterated her famous quote: “There’s a special place in hell for women who don’t help each other.”

Rice said women must work twice as hard and be willing to be the first. She currently juggles three roles, as a Stanford University political science professor and Denning professor in global business and the economy for Stanford’s Graduate School of Business and as a senior fellow on public policy for the Hoover Institution.

Haefner concluded the “fascinating conversation” by thanking his guests and then offering his insights.

“I think we all agree that we are living and have lived in an imperfect democracy, but that we shouldn’t forget the greatness of what it has offered, and you two are great examples of that,” he said. “And in a parallel form, I would say higher education also plays a critical role. … I would say we too are not perfect and that we have our challenges, but it is those challenges that make us stronger — because once we face them and find solutions, we are better off.