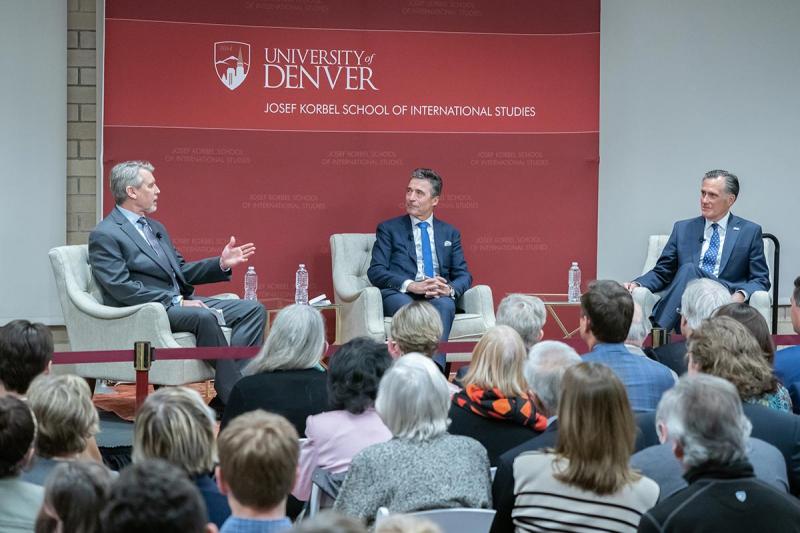 With authoritarian governments on the rise and with accusations of widespread foreign influence on U.S. and European elections, political scientists and experts of various stripes are increasingly questioning the resiliency and global power of democracy.

“Around the world and here at home, perhaps the greatest challenge of our age is the challenge to democracy,” Mayer said, explaining the Korbel School’s commitment to enriching conversation. “From the spread of fake news to the plague of hyper-partisanship to the rise of autocrats, democratic governance is under stress. Unless we heal our politics, we will likely make little progress on the other issues of our time.”

The trio came together just weeks after Romney made history as the first senator in U.S. history to cast a vote in favor of impeaching his own party’s president. That vote, among others, represents a shift in Romney’s attitude toward leadership he hopes will restore democratic values.

“I can tell you that as a political person there are a couple of times that I have taken positions that were more expedient than they were based upon conviction, and I remember those things precisely and I regret them enormously. … I’m not doing that again,” Romney told a standing-room-only crowd assembled at DU’s Anna and John J. Sie Complex for International Relations. “Don’t let your conscience be indicted by your sense of right and wrong.”

Romney and Rasmussen both raised serious concerns about a range of troubling developments, including the growing power of China, a lack of strong government leaders, misuse of technology and intensifying political tribalism.

Mayer began the conversation by questioning Rasmussen — who also served as secretary general of NATO and founder of the nonprofit Alliance of Democracies — about the mechanisms behind democracy’s apparent decline.

Rasmussen expressed concern about what he deemed an absence of strong democratic leadership. He was particularly critical of the United States, saying the country has set a bad example for the larger world.

“We know from experience that when the United States retreats, they leave behind a vacuum and that vacuum is filled by the bad guys. That’s why [Vladimir] Putin, Xi Jinping, Kim Jung-un, [Bashar] al-Assad, [Recep Tayyip] Erdogan and all the other autocrats now have more room [to] maneuver,” Rasmussen said. “The world needs a policeman to uphold law and order, and when the policemen try to retire, you will see international disorder — and that’s what we are seeing right now. A superpower does not get to retire.”

For Romney, China represented a key threat to democracy.

“China is competing economically, and they have an approach that does not follow the rules of the road most of us are following. We believe in free trade, but not when someone is cheating as they are and following predatory practices. So how does a small country like America compete with a large country like China? Only by linking up with our friends,” Romney explained. “This whole nationalism idea … is the exact opposite of what we need as we confront an emerging China.”

In the face of such challenges, Rasmussen and Romney called for accelerated public participation — political or otherwise.

Rasmussen drew on Edmund Burke’s famous words for inspiration: “The only thing necessary for the triumph of evil is for good men [and women] to do nothing.”