Outside the classroom: Game, Set, Match! 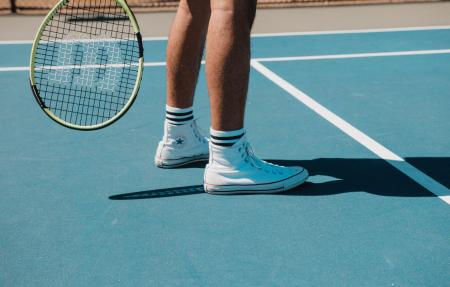 On any given Friday afternoon, a group of graduate students gather atop one of University of Denver’s parking garages for a test of willpower, determination, and athleticism.  Or, in less abstract terms, to play tennis with each other. Rallies are favored over points, and casual conversation has been known to interrupt the flow of play. Close observation of this group unearths an interesting assemblage of membership, as one of the players appears significantly younger than the typical age of a graduate student, while two players possess professorial auras. Further observation reveals the two individuals to be Singumbe Muyeba, assistant professor of International Studies and African Development at the Josef Korbel School of International Studies and Abigail Kabandula, visiting teaching assistant professor of International Studies and director of the Africa Center at the Korbel School. The younger player is their son, Christian.

The group began with modest ambition and turnout in the spring of 2021. A few students approached Muyeba about playing tennis after they learned about his previous playing experience. From that point, the group adopted a consistent playing time and location, meeting every week since its inception. Though the number varies week to week, students prioritize attending the weekly sessions to help relieve the stress of balancing work, a social life, and graduate school. Even a car accident cannot keep some students away, as one student can attest. Colin Babikian, a second year International Studies graduate student, was rear ended on the way to a hitting session in mid-July. Babikian remembers thinking, “it happened a block away from the courts, and I thought about going to a body shop right then, but I couldn’t miss playing some tennis. I could still drive the car, so I figured a few more hours wouldn’t hurt.” Playing tennis that afternoon helped Babikian momentarily forget the colossal headache that accidents inevitably incur.

One of the original players, Tori Spivey, a second-year international development graduate student, appreciates the conversations with Muyeba each week, saying “not only does [Muyeba] bring his skill and energy to the court, but water breaks are made all the more rejuvenating with his ability to spark intriguing conversation, more or less teaching a master class on asking the right questions to get to know someone better.” Another student, Aileena Roberts, says “playing tennis with professors outside of classes helps take the academic pressure out of interactions…and shows you a more fun side.” The opportunity for students and professors to engage outside of Korbel creates a stronger sense of community.

The faculty also enjoy the ability to interact with students outside the confines of the classroom. The relaxed setting allows for some playful competitiveness between students and professors. While a graduate student, Muyeba recollects he “had the opportunity to be invited to an informal tennis group organized by professors at the University of Cape Town. This allowed me access to intellectual exchange and advice that I could not easily obtain in a formal setting.” As faculty, Muyeba appreciates the opportunity to return the favor, remarking that, “students keep professors on top of things through the questions that they ask, but will often hold back questions in a formal setting. What better setting to ask and answer questions and have intellectual exchange than on court side right after hitting several shots.”

Though the snowy winter weather caused a brief hiatus, the melting snow and sunny afternoons will soon allow students to return to swatting spherical fuzzies around the court. Hopefully, a large swatch of students will emerge from winter hibernation hankering to play some tennis. If you listen closely, you can hear the faint sound of strings being tightened, shoes being laced, and the soft hiss of pressurized air escaping a newly opened can of tennis balls. Spring is on the horizon at the Korbel School.