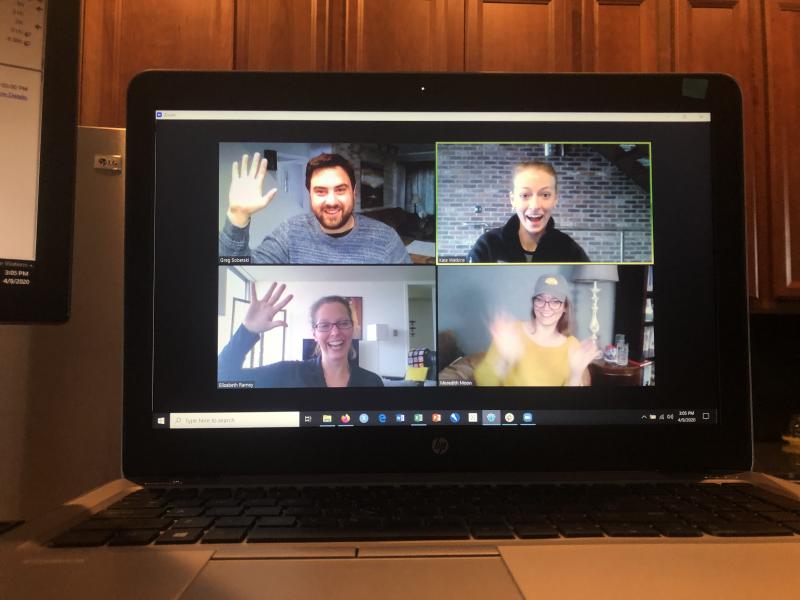 As economists on the Colorado Legislative Council’s economics team, University of Denver alumni Meredith Moon, Elizabeth Ramey, Greg Sobetski and Kate Watkins spent the early months of the year preparing their quarterly budget forecast, scheduled to be presented to legislators in March, just in time to develop and finalize the state’s budget.

But with the pandemic taking hold of the entire country and with economic uncertainty on the rise, they were tasked with presenting an additional forecast in May, while also having their usual June forecast on the table.

“We were all scrambling to keep up with everything changing in the economy and everything changing in our revenue outlets, while also having our world turned upside down,” says Sobetski, who earned his bachelor’s in international studies and Spanish and his master’s in global finance, trade and economic integration (GFTEI) at DU in 2011 and 2012, respectively. “Instead of doing one forecast during [the legislative] session, which is already a really big lift, we ended up doing three: March, May and June. It was a whirlwind.”

Not only did the pandemic require extra work, but it also upped the stakes, says Watkins, who serves as chief economist and who completed her undergraduate degree at DU before earning her master’s from the Josef Korbel School of International Studies’ GFTEI program in 2008.

“This situation is where we felt the impact quite a bit, in that our forecast and the governor’s forecast would determine how much they were going to cut the budget. So it certainly was a lot of weight on our shoulders,” she says. “The unique challenges that are ongoing with COVID are that it’s not just forecasting the economy; it’s having to forecast or make assumptions for health policies and the trajectory of the virus itself.”

COVID-19 may have intensified the pressure and increased the workload, but Sobetski, Watkins, Ramey and Moon (plus two additional team members) relied on teamwork to get the job done.

Through tough moments, they say, it was their common values — many of them formed at DU — that got them through. They didn’t attend at the same time, but they left the University shaped by its mission and dedication to the public good, says Watkins.

“We were attracted to DU because it has programs that are strong and [that] attracted students that are very service-minded. That has created quite a bit of cohesion and is also why we continue to function at a really high level,” she explains.

This was particularly true of the GFTEI program, says Moon, who graduated with her master’s in 2017. “It is very service-oriented and public-sector-oriented. As opposed to a traditional economics program that might be more focused on academics or on going into the private sector, I think Korbel is really focused on more nonprofit and government work,” she says.

All four members of the economics team credit professors George DeMartino and Ilene Grabel, who co-direct the GFTEI program, with having a significant impact on their lives.

“My trajectory in terms of my education after DU and then my career was to a large extent shaped by my experiences at DU and the kind of training I received there,” says Ramey, who earned her master’s in economics and studied under both DeMartino and Grabel. She also followed in their footsteps by pursuing a doctoral degree in economics at the University of Massachusetts. “My desire to come back to public service and public policy work stems from that initial experience at DU and the focus on service and interdisciplinary work and broad-based knowledge and skills.”

The respect is mutual, say DeMartino and Grabel.

“At this time of extreme partisanship when there are so many pressing economic and social challenges, it is absolutely essential that public servants like Kate, Meredith, Greg and Elizabeth conduct technically sophisticated, rigorous and independent analysis of economic policies. The future of our state and our country depends on this kind of work,” Grabel says.

DeMartino agrees: “[They] are modeling the professionalism we hope to cultivate in our students,” he notes. “I can remember so well the time I got to spend with each of them in and out of the classroom, and it was clear to me even then that they would find ways to apply their expertise for the benefit of others. And they’ve done so much for cohorts of students who have followed them.”