On September 15, more than 700 people—alumni, faculty, staff, visitors and friends—came together to celebrate the successes of our school, our alumni and current students during the 19th Annual Josef Korbel School of International Studies' Korbel Dinner. The event benefits the Korbel School's numerous scholarship opportunities and programs.

The event's keynote speaker, Vice President Joe Biden, was introduced by Dean Christopher Hill. During his introduction the dean joked that Biden requested he go to Baghdad as an ambassador. So, in return, he asked that Biden come to Denver.

"The dean and I have been friends for a long time...and there's certain people I look to over my career and say I actually learned a lot from them," said Biden. "Chris is one of those guys."

Biden opened his hour-long speech by talking about the legacy of the eponymous Josef Korbel.

"It's a real honor to be here to honor the legacy of a man...who believed so deeply in the potential power of American leadership," said Biden. "That was sort of the gravamen of his notion of what international order was all about—he had an unfaltering faith in the capacity of America to do good in the world. And he knew better than anyone, that America was and remains, as his daughter, Madeleine Albright, always used to say, the indispensable nation. That's not hyperbole...The ambassador understood the need for great educational institutions, like the University of Denver, to continue to refresh and renew our commitment to these principles."

Biden stressed that the overwhelming interest of the United States should be to remain deeply engaged in the world, especially now.

"We can neither protect nor advance our interests by turning inward," he said.

Biden talked about a changing world. He said as a nation, we have reached an inflection point. To stress his meaning, Biden quoted the poet William Butler Yeats: "All changed, changed utterly: A terrible beauty is born."

"In the last 15 years, all has changed in the world," said Biden.

He went on to talk about the increasing turmoil and authoritarian regimes that have come to power in the Middle East. He mentioned that the epicenter of the world's energy is no longer where it used to be, but now is in North America.

Biden said that one of the main focuses when he and President Obama came into office was to restore respect for American leadership around the world. The ability of America to lead the world rests on two pillars, he said. One of those pillars is the strength of the American economy. The second is leading by the power of our example, not the example of our power.

After his speech, Biden made a surprise appearance at the student watch party—a first-ever event for all DU students during which the Korbel Dinner was streamed live and, importantly, pizza was provided. Biden engaged with the more than 200 students in attendance and allowed time to answer questions. 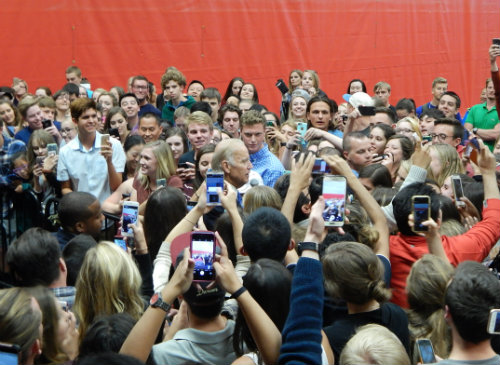 International Relations student Reese Arthur was one of the undergraduates in attendance at the watch party.

"I think he has such power, especially with youth," she said. "He can encourage so many people and inspire so many. Him coming here and being able to speak to the students, I think that's really important. I'm really proud that he could come here and talk to us."

International Business student Miles Dorrance said after hearing Biden speak, he was inspired to be more engaged in international affairs.

"Just hearing what he has to say, his ideas, and his foreign policy is so incredible," he said. "It makes me really proud to be here at the University of Denver."

When she introduced the Korbel Dinner, Chancellor Rebecca Chopp spoke about the Korbel alumni who have gone on to become influential figures or world leaders.

"For more than half a century, the Korbel School has educated and inspired leaders whose works spans the globe," she said. "From a secretary of state to foreign ministers in Chile and Iran; from a chief of staff in the U.S. Army, to the first U.S. ambassador to the African Union—Korbel graduates are shaping diplomacy and the political environments of our world."

This is something that International Studies student Emily Robinson took away from the watch party.

"(Being at Korbel) feels like a really important thing to be a part of," she said. "This is a large community with connections all around the world."