How I Learned Diplomacy Amidst Nuclear Tensions

I recently participated in negotiations to solve a major global issue. And while I can't say I was completely successful, significant headway was made.

On Oct. 21-22, I took part in the U.S. Army War College's International Strategic Crisis Negotiation Exercise—a unique opportunity to engage in simulated high-tension crisis negotiations and practice diplomacy around an international conflict. The event was sponsored by the Office of Career and Professional Development at the University of Denver's Josef Korbel School of International Studies. 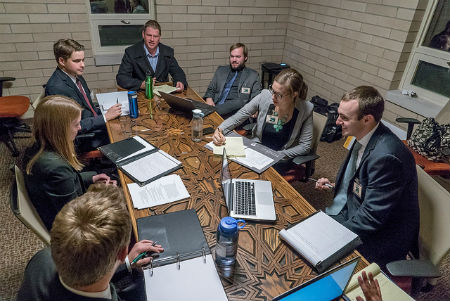 The scenario for the exercise provided in-depth detail for all events up to present day. Then, the War College provided plausible future events up to October 2017, which included heightened nuclear tensions between India and Pakistan and terrorist attacks in the Jammu and Kashmir region. Teams were to negotiate as if it were 2017.

Each of the seven teams had independent, secret end goals they were striving to accomplish by the end of the exercise. As in the real world, my team and I never learned the other teams' end goals, but some became apparent as the exercise progressed. As a member of the PDP team, our primary negotiation issues were requesting an investigation into human rights abuses conducted by the Indian government in Jammu and Kashmir; requesting immediate protection and humanitarian aid for the 950,000 people in need in Jammu and Kashmir; and deciding whether Jammu and Kashmir should be autonomous or a region belonging to India or Pakistan. 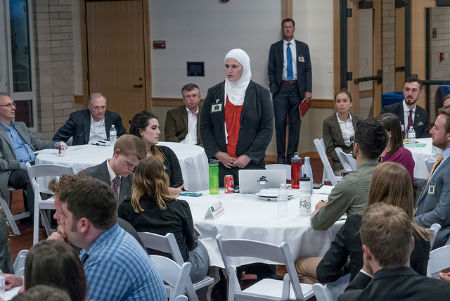 So, how do you negotiate for these heady goals with other countries whose interests are probably self-serving or completely contradictory? This is where I felt ill-prepared. I knew next to nothing about Jammu and Kashmir and only bits and pieces of India-Pakistan and Russia-China relations and how the U.S. and U.K. fit in. Even though I'd read the dense 80-page informational document provided by the Army War College, I was still nervous entering into my first international negotiation with the U.K. But, by the end of the first day, things began to click and my teammates more than filled in my information gaps. And by the close of the second day, it was difficult to not be overcome with joy at successful negotiations and outright rage when another team blatantly denies you—but that's diplomacy, right ?

For the most part, the entire exercise was structured for alternating 45-minute team meetings and 15- or 30-minute bi- or multi-lateral discussions. During team meetings, you could request discussion with other teams and also issue press releases to all other teams. Again, as in the real world, meetings could be outright ignored or scheduled, but the other team wouldn't show. For example, China and Russia never accepted my team's meeting requests.

Regardless, I'd like to circle back to the beginning when I said I experienced some success. Through negotiations, the U.S., U.K. and Pakistan agreed to provide humanitarian assistance for Jammu and Kashmir. Given a little more time, I believe we could have garnered support for a plebiscite regarding autonomy.

In the end, the exercise was challenging, mimicking real-life scenarios in which difficult decisions must be made instantly. The possible end states for the scenario were infinite and, thus, teams were forced into unique discussions and decisions. The entire process panned out like an endlessly complex game, with rounds passing during each meeting session, points scored or lost by means of negotiation and the rules open to interpretation. Game theory is, after all, the study of how people make decisions within contexts of conflict and cooperation.