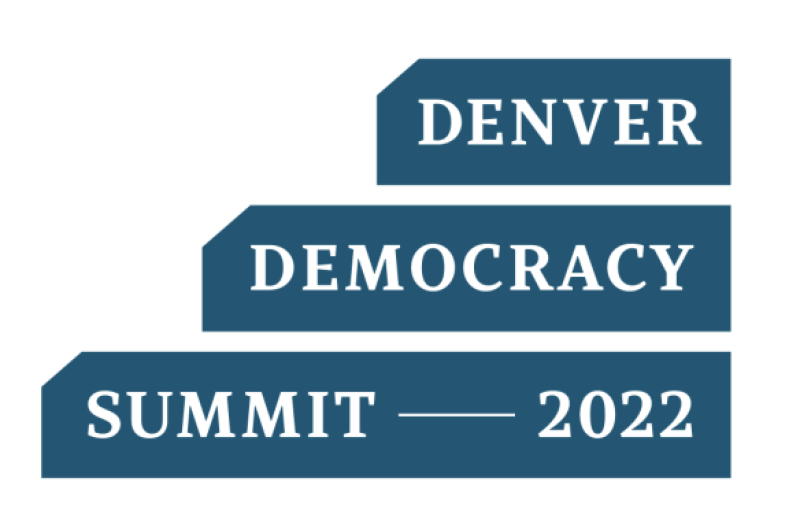 As tensions escalate across Eastern Europe and democratic backsliding continues to occur around the world, the 2022 Denver Democracy Summit came at an opportune time. Hosted annually at the Korbel School of International Studies, the Summit brings together thought leaders, activists, and agenda setters to discuss a range of issues facing democracy around the world.

Spread out across two days, each day dealt with various topics and issues confronting democracy. The first day centered around social media’s influence in democracy, climate change, and autocratic regimes. The first speaker of the event, Nobel Peace Prize Laureate Maria Ressa, emphasized interpersonal connections in the face of social media’s erosion of trust. “To defend democracy we must take on a man-to-man defense,” she said. “Person to person is where trust is rebuilt.” According to Ressa, social media can erode societal trust and contributes to misinformation, which prevents integrity in elections. Anna Nicolaou of the Financial Times summarized the sentiment when she said that “the problem fundamentally is about trust and due to the internet and social media there are so many places you can find information that can be true or false.” Ultimately, as Zaid Zaid, head of public policy at Cloudfare, succinctly put it, “You need to call a spade a spade and say that something is not true.” The future of a healthy democracy relies on the ability to do so.

After social media, the Summit transitioned into a discussion about democratic resistance in defiance of autocratic rule. The two speakers, Damon Wilson from the National Endowment for Democracy, and the leader of the Democratic Belarus, Sviatlana Tsikhanouskaya, brought invaluable insight and offered hope about autocratic threats to democratic institutions. While Wilson aptly discussed democratic erosion happening across the globe, Tsikhanouskaya localized the issue when she discussed her personal fight against the autocratic Belarus government. She described her fight for free and fair elections in Belarus and how “our strength is our unity and our consistency…everyone understands what we are fighting for, we are fighting for dignity, we are fighting for values.”

Finally, climate change took center stage and with it an emphasis on civic power. Across the three moderated sessions, panelists emphasized the power of civic engagement when dealing with climate change around the world. Ani Dasgupta, President and CEO of World Resources Institute described the unified front combatting climate change when he said, “we are seeing that whether one is from the upper middle class, the middle class, or are poor, young people want to fight the climate change.” While climate change resonates across civil society, Dean of the Fletcher School at Tufts University Rachel Kyte warned that “we have not yet internalized the climate crisis into our multinational structures.” That disconnect makes the need for mobilization and organization in non-political actors even more important. The climate change sessions ended in hope that democratic regimes would respond to the call for action originating from their constituents.

As the Summit transitioned to day two, the Summit shifted towards themes of the role of America in a shifting global landscape and how America should react to democratic erosion within its boundary. For America’s role in the world, Senator Michael Bennett of Colorado described how “America’s technology leadership gave democracy a crucial edge in the 20th century, and the question is whether it will do the same in the 21st century.” In terms of the necessity for America in the world, Anders Fogh Rasmussen, Chairman of the Alliance of Democracies, and former Secretary General of NATO and former Prime Minister of Denmark stressed the importance of America continuing to be heavily involved in global affairs, as he thinks, “when the US retreats, it will leave behind a vacuum, and this vacuum leaves behind the bad guys”.

However, like the first day of the Summit, panelists highlighted the impact of eroding democratic institutions, as Birgitta Ohlsson, Director of Political Parties, noted that “the global decline in democracy has not spared neither the United States nor Europe.” As the conversation shifted from global to local, Congressman for Colorado’s 2nd District Representative Joe Neguse stressed that “[Democracy] requires the commitment of each and every citizen to make it work. I think Colorado does it well but there’s always room for improvement.” In response to the rash of voter registration laws designed in part to reduce the number of eligible people able to vote, Jonah Goldberg stressed that the issues extend deeper than access to the ballot box. He said, “we would have a better democracy, a richer and fuller democracy, if we people valued the things other than just voting that lead them to give more informed decision. Democracy depends on conversations.” The day ended with a conversation between congressional representative Liz Cheney of Wyoming and congressional representative Jason Crow of Colorado about the January 6, 2021 insurrection on the U.S. Capitol, the ability to restore American democracy and how to achieve that.

At the end of each day, the artist in residence Kevin Kallaugher "KAL" from the Economist unveiled his cartoons depicting the themes discussed throughout the day. As he revealed his creations, Dean Fritz Mayer conversed with him about what the viewers had just watched. As Mayer engaged with the conversations with the backdrop of satirical cartoons displayed across the screen, it made the enumerable and existential issues discussed throughout the day seem just a tad more manageable. And as the Dean bid farewell the audience for the last time before next year’s event, the audience was left with unanswered questions, dread about the state of the world, and yet somehow slightly more hope.

To watch videos from the 2022 summit, check out the Korbel YouTube channel!