In a post-9/11 world the FBI continues to tackle a wide variety of national security threats and federal crimes—ranging from terrorism to cyber-attacks, healthcare and investment fraud, illegal gambling enterprises, child pornography and gang activity. With new tools and capabilities, the FBI is committed to continuing its work to defend citizens and protect the nation. 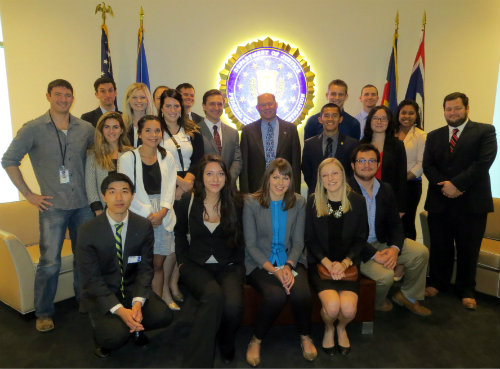 A highlight of the visit was a tour of the FBI armory, followed by presentations from the FBI Evidence Recovery and Processing Team (ERPT), which is responsible for surveying crime scenes and collecting evidence. This evidence includes physical evidence (blood, DNA and fingerprints) as well as technical evidence (bullet trajectory and blood spatter pattern identification).

The students also met with the Hazardous Materials (HAZMAT) Team, an eight-member team responsible for the handling of hazardous materials which can be biological, chemical or radiological. This team was responsible for handling the explosives used in 2009 by Najibullah Zazi, who attempted to drive from Aurora, Colorado, to New York City with the goal of detonating explosives in the New York subway system, a plan which then-Attorney General Eric Holder called one of the most serious terrorist threats to our nation since September 11. Zazi pleaded guilty to conspiracy to use a weapon of mass destruction.