Will the U.S. and Japan Step-up for Taiwan? 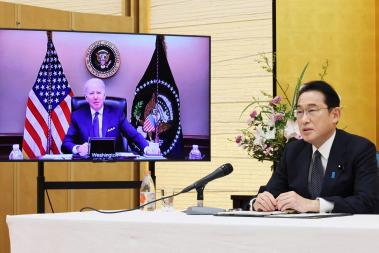 The Crossley Center for Public Opinion Research March 23 panel of experts analyzed the impact of the invasion of Ukraine on the policies of the Indo-Pacific and especially what it means for Taiwan. In their comments to the question will the U.S. and Japan defend Taiwan, they said:

Koji Murata – Professor, Doshisha University, Kyoto. “Japan is getting more assertive in international security affairs.” “Security of Taiwan is closely connected to Japan’s security.” “Taiwan is much, much more important to the U.S. than Ukraine.” “Fighting against a nuclear power is extremely dangerous and I’m sure the U.S. is reluctant to fight against China over Taiwan. But nuclear deterrence is not all or nothing; it’s much nuanced.”

Suisheng Zhao – Professor, Korbel School Director of the Center for China-U.S. Cooperation. “These leaders should never underestimate the resistance of any people on their own motherland to an outside invader. The U.S. learned this in its invasions of Iraq and Afghanistan. China would face the same if it went in with force to Taiwan.” “If I was China’s leader, I would think the U.S. wouldn’t get involved [in defending Taiwan] because it would be a nuclear war.” “U.S. power is in decline in comparison with China.”

Floyd Ciruli – Professor, Korbel School Director of the Crossley Center for Public Opinion Research. “Putin’s and Xi’s authoritarian model isn’t an easy sell. Neither are respected or trusted among the world’s democracies. The Ukraine invasion has united the West and NATO is revived. Russia’s efforts have alienated people they want on their side.” “America today wouldn’t go to war with China over Taiwan. But the line is moving with the growing awareness that these two autocratic nations want to change the status quo.”