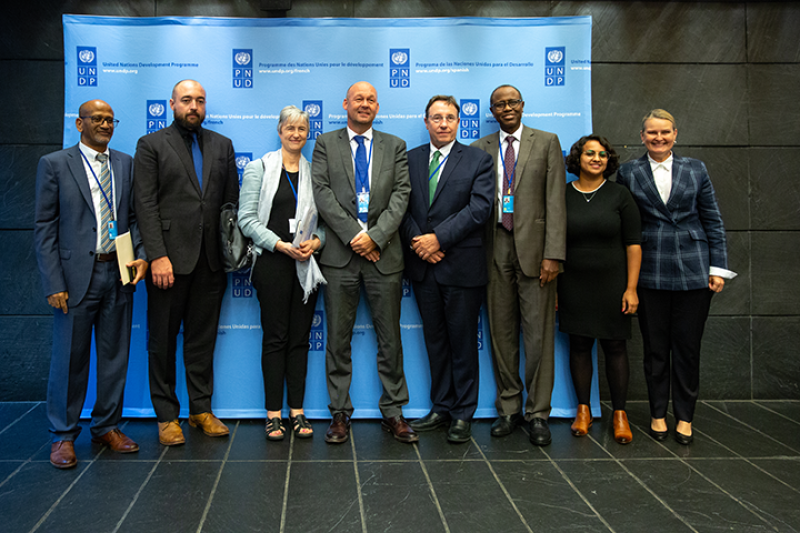 Jonathan Moyer (second from left) delivers the Pardee Center's first report on the conflict in Yemen to various leaders including Achim Steiner, administrator of the United Nations Development Programme.

At the Sié Chéou-Kang Complex at the Josef Korbel School of International Studies, University of Denver students join faculty and staff on research projects that inform global leaders and shape policy. That’s especially true at the Frederick S. Pardee Center for International Futures, where assistant professor and center director Jonathan Moyer is working with a team of researchers pursuing policy-oriented work focused on confronting persistent and emerging challenges.

From studying the effect of COVID-19 on global development to researching the impact of the conflict in Yemen, the Pardee Center is creating a new understanding of what the future could look like under different conditions.

“We have built a community of researchers interested in doing policy-oriented work that makes our world a better place,” Moyer says. “This research is truly a group effort.”

Moyer, who completed his master’s and PhD from DU’s Josef Korbel School of International Studies, has directed the Pardee Center since 2016. Its research draws on the International Futures (IFs) modeling software system developed over the past four decades by Barry Hughes, the center’s founding director.

For students like Charles Bell, a junior majoring in international studies, Pardee’s roster of projects means a hands-on introduction to some of the world’s most pressing problems. Bell is a member of Pardee’s Diplometrics Program, where he and other students compile and analyze data sets on everything from military capabilities and non-state actors to diplomatic capacity. The work not only exposes students to Pardee’s unique software, it trains them to think about the most effective ways to make an impact.

“You are constantly reminded that you are part of something bigger,” he says. “The work you do is immensely larger than you.”

Thanks to contributions from Bell and other students, the Diplometrics Program published its findings on a host of data initiatives with The Atlantic Council, a respected think-tank promoting constructive leadership and engagement in international affairs.

Beyond his role as Pardee Center director, Moyer researches the drivers of a country’s economic and political fragility and sustainable development goals. His work has been funded by the African Union Development Agency and the United Nations, and he frequently invites students to join him on projects.

“Being co-authored within the literary world of academia can be a daunting task,” says Jen Evans, a PhD candidate and researcher with the Pardee Center. “Having the constant support and knowledge of Dr. Moyer makes the task easier. Dr. Moyer is a very supporting and encouraging mentor who is not only there to help you with the publication process and research but is also really eager to impart you with wisdom for your academic success and future career. He invests in his students and truly sets them up for success.”

Moyer’s focus on real-time international affairs provides students with research opportunities that have a tangible effect on policy.

“It feels good to contribute to understanding how international aid works and how development works,” Evans says. “It is encouraging to be able to make a sustainable change as a student.”

In February, the University of Denver officially joined the list of Research 1 universities, a designation awarded by the Carnegie Classification of Institutions of Higher Education. DU is now on par with other universities conducting the highest levels of research activity and is the only private R1 institution in the Rocky Mountain region.

Moyer hopes the award will result in greater exposure for the Pardee Center, which could lead to more funding for research and more opportunity for student involvement. He says the accomplishment of reaching R1 status demonstrates the breadth of research taking place on campus.

“Pardee’s continued improvement and work is not an individual effort but one of a community of researchers, faculty members and staff,” Moyer says. “We should celebrate and highlight all those who are involved in making DU’s campus an inclusive and collaborative research institution.”