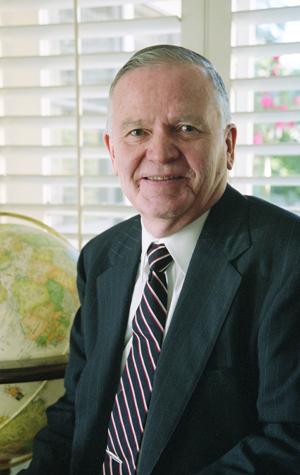 Frederick S. Pardee is an economist, businessman, and philanthropist, whose generous, sustaining support has made the International Futures project the success it is today. His support made possible the Center's flagship publication, Patterns of Human Progress, which became a catalyst for the ongoing work of the Center.

In 2007, Mr. Pardee supplied the support that allowed the University of Denver and its Josef Korbel School of International Studies to create the Frederick S. Pardee Center for International Futures. This gift sustained the Center's work hosting International Futures (IFs), the world's leading forecasting system for the study of the human condition. In 2009, he also supported the building of an annex to Ben Cherrington Hall to house the Center, a facility that provides the growing Center team with basic workspace, video-conferencing resources, and presentation capability. Mr. Pardee’s contributions to the visioning and understanding of ways to improve the global human condition led the University of Denver to award him with an honorary PhD in 2013.

Mr. Pardee has also provided support to build or enhance a number of other institutions that are thus siblings of our own center. In 2000 he provided the support to establish Boston University's Frederick S. Pardee Center for the Study of the Longer-Range Future. In 2013 he provided another gift for the creation of the Boston University Frederick S. Pardee Global Studies School.

In 2001, he provided a gift to RAND that created the Frederick S. Pardee Center for Longer Range Global Policy and the Future of the Human Condition. With additional subsequent funding to RAND, he greatly strengthened what is arguably the premier policy-oriented Ph.D. program in the country, the renamed Frederick S. Pardee RAND Graduate School.

Recently, Mr. Pardee has funded an International Futures installation at the African Leadership Academy in Johannesburg, a secondary education institution that prepares an elite cadre of students from across Africa for future careers of leadership and service. Along with the Frederick S. Pardee Library for the Future of Africa on campus, the school now hosts the Pardee Center for African Futures, which offers interactive, hands-on training in the IFs model to help young scholars think about the future in data-driven, integrated ways.